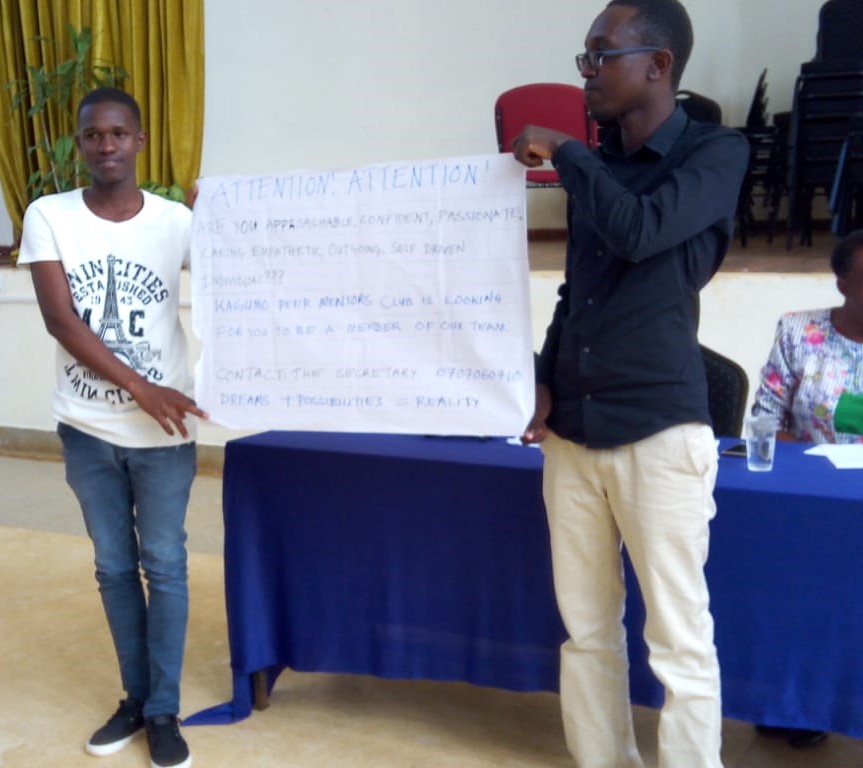 The peer mentors hosted Mr.Samuel Weru for a workshop on suicide mitigation during which they were sensitized on causes of depression and ways of coping with it as well; depression being one of the major contributors to suicidal tendencies. Other mental disorders that could lead to suicide include schizophrenia, personality disorders, anxiety disorders and substance abuse.

Mr Weru outlined the signs of a person who is contemplating suicide saying that such a person talks about committing suicide often, has trouble eating, withdraws from friends, loses  interest in work and studies and may also be seen to give away their prized possessions. Such a person may seem to be preoccupied with death and dying and some may revert to drug and substance abuse and also start to take unnecessary risks. Sometimes a person with suicidal tendencies does not care about their personal appearance anymore and some may even make burial arrangements. A good number will prepare for death by writing a suicide note.

The peer mentors were taken through some of the predisposing factors or conditions associated with  an increase in suicidal tendencies and they include previous suicide attempts, mental health disorders, alcohol abuse, feelings of helplessness, impulsive behavior, aggressive behavior & bullying and a history of suicidal tendencies in the family.

Suicide cases can be reduced by offering guidance and counseling services to those prone as identified earlier and encouraging such persons to share their problems with someone they can trust.

Another measure of mitigation is creating awareness on the dangers of committing suicide and also by ensuring that lines of communication with those prone are kept always open while keeping in mind the need to choose words carefully while engaging with them.

As peer mentors we feel privileged to be part of the team that will steer Kagumo College towards ensuring an environment where all members enjoy good mental and social health as a way of helping members cope with the issues that may afflict them and derail them from their core-mandate – getting trained as a proficient teacher of the 21st century.